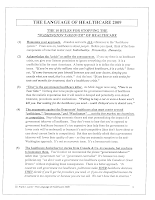 I’ve got plenty of words to describe Frank Luntz – especially after this NYT Magazine interview – but I’ll leave the most colorful ones to your imagination. Here are some of the most telling excerpts from yesterday’s piece. (My comments are italicized):

Your new 28-page memo, “The Language of Health Care,” was sent to Republicans in Congress and recommends that they speak about health care reform in ominous phrases. For instance, you suggest that they refer to “a Washington takeover.”
“Takeover” is a word that grabs attention. (Yet, a big fat lie)

Is it a correct description of the president’s plans for reform?
We don’t know what he is proposing. We want to avoid “a Washington takeover.” (We know exactly what he’s proposing. He’s said it over and over and over again. Read a newspaper. Or turn on the news. Fox doesn’t count.)

But that’s not at issue. What the Democrats want is for everyone to be able to choose between their old, private health-insurance plan and an all-new, public health-insurance option.
I’m not a policy person. I’m a language person. (Guess what? I do language AND policy. You have to know the latter to accurately craft the former. Although, seeing as how accuracy isn’t your concern…)

Who paid you to write the health care memo?
It’s not relevant. (Of course it isn’t. Silly us for asking.)