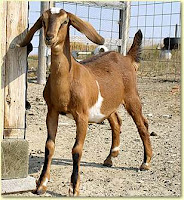 Heard a story on NPR this morning about a bunch of hockey fans in Canada who are buying goats for families in Kenya. Here’s a Vancouver Sun write about how the cause got started:

Sitting around Sunday drinking beer, they were talking about growing their playoff goatees when Nagtegaal’s cousin Matthew Beimers — a teacher at Fraser Valley Christian high — reminded them about the goat sponsorship program the school supports, in which families in Sierra Leone receive a goat for every $25 donated.

“It wasn’t long before we moved from goatees to goats and we decided we’d buy a goat for a poor family for every game the Canucks win,” Nagtegaal said.

The group is hoping other fans will join in and pledge to buy a goat for each Canucks victory.

Joel Nagtegaal, a university student from Langley, B.C., and some friends marked the Canucks playoff run by donating goats for each win to a village in Kenya.

The group came up with the goat-giving idea as a play on both the hockey custom of growing a beard or goatee, as well as the chant of “Go Canucks Go.”

As a result, 875 goats are now Africa-bound.

Nagtegaal says he has received an email from someone in Kenya and the most rewarding part of the experience has been hearing how the donations are changing lives.

He doesn’t know where the charity drive will go from here, although he is considering a “goat for the gold” campaign for the 2010 Winter Olympics.

NPR reported goatees to goats was the result of something getting lost in translation, but now looking through other news reports and the website, the cause seems a little more deliberate than mere drunken miscommunication.

Of course it’s a better story if a bunch of intoxicated hockey diehards accidentally committed to donating goats instead of semi-creative facial hair.