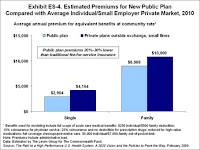 If you read one thing about the public health insurance option this week (so far), make it this 101 by Ezra:

…Enter the public insurance option. It doesn’t replace the insurance individuals already rely on. But it provides an alternative. It lets them make the decision. It’s the health care equivalent of being pro-choice. And it thus serves two purposes. The first is to act as a public insurer. To use market share to bargain down the prices of services, much as Medicare does. To lower administrative costs. To operate outside the need for profit, and quarterly results…The second is to apply competitive pressure to the rest of the insurance industry. If the public plan is ruthlessly lowering its administrative costs and garnering a reputation for decent, good-faith service, it will take market share from the private insurers. The private insurers will have to respond in kind to retain their customers. If they fail to adapt, the system could become something resembling a single-payer structure.

But that’s not the most likely outcome. Rather, the theory here is simple: If you can’t replace them, convert them. If the public plan works, then private insurance will work better as well. In this telling, the simple existence of the public plan forces a more honest insurance market: Private insurers need to offer premiums closer to their marginal cost, and they have to cut administrative costs, and they have to work on their reputation for cruelty and capriciousness. The existence of another option changes the market. Individuals will have access to private insurers, but they’ll no longer be stuck with them.

Read the whole thing, and then seriously consider emailing it around to anyone who hates that their insurance premiums go up all the time for no reason, anyone who’s been denied a medication or treatment for no reason, or anyone who stays in a job they hate just for the health insurance.

This isn’t about politics. It’s about profit. Insurance companies and the Members of Congress they bankroll with campaign contributions are fighting tooth and nail against something that will make your life better. Plain and simple. Remember, Members of Congress don’t have to navigate the insurance market. They don’t have to worry about getting sick, seeing a doctor, or being refused coverage because of arbitrarily defined pre-existing conditions. Their health care needs are subsidized. You take care of them. Is it too much to ask them to finally take care of you?