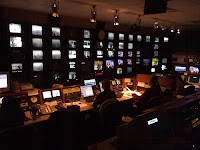 I give up. Does no one in TV news fact check anymore? When I was in journalism, I wouldn’t feel comfortable writing something or putting something on the air that I didn’t know to be true. That’s why you do research and make phone calls. When someone spews crap, you call them out on it. I thought that’s what reporting was for.

Now I know why I got out of the business altogether.

Rep. John Boehner got up on TV today and said – uncontested – that CBO scored a partial Kennedy bill and figured out how much the public option would cost.

There is no public option in the bill. Period. It’s part of the problem we have with the CBO estimates. The partial bill didn’t include big ticket items that would lower costs and increase coverage like the employer requirement for shared responsibility, the public health insurance plan, and policies like Medicare.

Earlier today, a TV producer sent me a list of questions for an interview tomorrow, and three of the six were about government-run health care. Nevermind no one is proposing government-run health care. The questions were regurgitated Rick Scott/right wing talking points. When I pointed out that we could talk about things like what Obama’s plan actually is, what the public option will do, how we plan to pay for reform… you know, things that actually inform the public, I got a nasty “I don’t need your lectures and charity.”

It’s not the least bit shocking, but it is completely disheartening.

But now that I’m a viewer and news consumer, I see what you see.

They don’t. And they’re just not.

UPDATE: Here’s the Boehner transcript. Remember, there is no public option in the bill:

BOEHNER: Well, I think the president is ignoring reality.

The Congressional Budget Office came out with a score on Senator Kennedy’s bill, just part of the score — of the — of his bill, that says that the public option would cost over $1 trillion, and would cause 23 million Americans to lose their private health care coverage, and only 16 million of which would — would be covered under the — the government plan.

And, so, it’s not just me and others. It’s — it’s very clear that the so-called public option would be subsidized by the government. It would draw people out of the private sector. It would cause companies to just give up their coverage and force people into a government-run plan.

BLITZER: I know you don’t…

What we want is, we want to work with the president to make sure that all Americans have access to high-quality, affordable health insurance.

BLITZER: I know you don’t want a government-run health insurance plan. You want a private-run plan.

What about this proposal, this compromise, in between? Kent Conrad, the Democratic senator, suggesting co-ops, where you — you band together hundreds of thousands of people, and you create a co-op that’s not government run. It’s privately run. But it — but it would potentially do the same thing.

No it wouldn’t. Not even close. But that’s fodder for another post. Right now, let’s just leave it at THERE IS NO PUBLIC OPTION IN THE BILL.