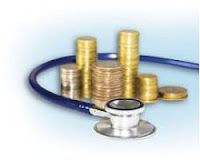 I just got off the phone with Quest Diagnostics trying to find out why a $94 bill from April 2008 is back in collections even though Quest assured me the insurance company mistake that started the problem in the first place had been taken care of months ago.

The collections agency usually puts through a recording, but today I got a real live obnoxious human. After many frustrating minutes explaining I owe nothing and the man on the other end of the line threatening to ruin my credit, I proceeded to explain in no uncertain terms I am not paying them a “f*cking dime.” Those were my exact words. Ask my coworkers. Everyone heard.

And the best part? No one flinched. Not one person.

I love my job. I get to fight the good fight for a living.

Not the most pleasant way to wrap up a week, but I declare I’ve earned my Friday. Most of today was spent out of the office, actually. I went up to the Hill to watch Richard tape a segment for The Colbert Report. It should air sometime in August. I’ll keep you posted.

But for now, happy weekend. Have a good one.

If this doesn’t make you mad, then I don’t know what will. From The Hill:

Sen. Chuck Grassley, the senior Republican on the Finance Committee, has assured his GOP colleagues that he will not sell them out and strike a private deal with Democrats on healthcare reform, according to Republican senators.

Grassley (Iowa), who is known for having a close relationship with Finance Committee Chairman Max Baucus (D-Mont.) and has been negotiating behind closed doors with Democrats for weeks, made the promise to the entire Senate Republican Conference at a meeting late on Wednesday, according to several senators who attended.

Grassley, Enzi and Sen. Olympia Snowe (R-Maine), members of the so-called Group of Six, told Senate Republican leaders and colleagues at the meeting that they would not commit to the legislation without first consulting the entire GOP conference.

And Grassley’s approach is markedly different from the one Baucus took when he was the ranking Democrat on the committee in 2001 and Republicans were trying to pass a massive package of tax cuts.

Baucus struck a deal with Republicans before giving the Democratic Conference a chance to review the deal, a maneuver that enraged his party leaders and gave bipartisan momentum to President George W. Bush’s tax package, which ultimately became law.

Grassley is not about to do that on the healthcare deal, Republicans say.

Not that this is the least big surprising, but Grassley’s now admitting he plans to screw Baucus, and the leading Dem on Finance still insists on playing nice. It’s infuriating.

The good news is there’s hope:

Now that Baucus is unable to report a deal by the end of next week, pressure will grow on Democratic leaders to force action on the Finance panel. That would mean pressing Baucus to report a bill with minimal GOP support or moving ahead without Baucus’s input. 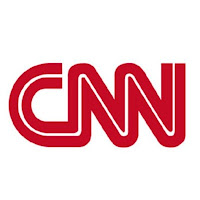 CNN just did a segment on false advertising in the health care debate and then went to commercial break and ran a false ad warning about government-run health care.

Way to stick to the truth. Here’s a novel idea. If you’re going to debunk the authenticity of an ad and you’re a NEWS channel, refuse to run the ad.

I know. Money trumps principle. But it would nice if it didn’t.

The busier I get, the harder it is to find time to blog. Apologies for the radio silence all day. I will do my best to make it up to you tomorrow.

Speaking of tomorrow and radio, I’m scheduled to chat with Jack and Rich at 9am. I’ve done the show a couple of times before, and it’s pretty entertaining. If you find yourself with a spare moment, check it out.

All for now. G’night moon. 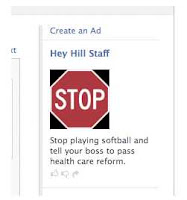 Take a look at the Facebook ad that totally did the trick.

You can also use our Click to Call tool. Plug in your info, and it calls you back with an instant connection to your Members of Congress.

If you need a little more help with message, the bottom line is this: We need health care reform now, and we need it to be good. We have to make sure health care is truly affordable for families and businesses, and we need a strong public health insurance option to lower costs and make the insurance companies behave better. 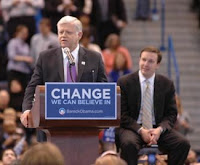 Great write from a small business owner on how health care reform will help him:

We got a letter earlier this month from our company health-insurance provider, informing us that our policy had been canceled for late payment of the premium. No warning or notice, just a cancellation letter. After lots of begging and pleading, a $3,700 check, and four days of heartburn for yours truly, we got it reinstated.

I suspected that the real reason for the cancellation was that we had the audacity to actually file some significant claims. The policy has a $5,000 deductible, but I had an appendectomy last year (about $18,000) and a few other claims as well. The insurance company assured us that this was not the case: Lots of small businesses had gotten cancellation notices, because lots of companies are falling behind on their premiums in this economy and the insurance company is cracking down.

Somehow I didn’t find that very reassuring. On the contrary, this incident reinforced my strong conviction that the idea that health care reform isn’t good for small businesses is arrant nonsense. If there is one thing the federal government can do to help my company, health care reform is it.

Consider the position we’re in with the above-mentioned incident. Unlike almost anything else we buy, health insurance is not something we can simply get from another vendor. In writing policies, insurance companies require that you have continuous coverage, or else they will exclude coverage for all pre-existing conditions (which when you get to be my age can be a lot of things). Thus cancellation of the policy would have permanently undermined our ability to get insurance.

I’m not saying we should be able to pay late with impunity. But a system in which we are subject to the shifting policies of an all-but-unregulated private insurance company that effectively has the power to deny our ability to get coverage anywhere is absurd.

Further, I had to spend several days sweating this issue, working with our office manager to fix it, trying to decide whether to tell people about the problem or wait until we got it resolved. This was time and energy not spent on anything having to do with what NewWest.Net is in business to do.

NYT has a great chart online here. Also in the NYT, a quote from Richard on subsidies and affordability:

Richard J. Kirsch, the national campaign manager of Health Care for America Now, a consumer group, expressed concern. “If Congress sets the limit at 300 percent of the poverty level,” Mr. Kirsch said, “millions of middle-income families would not be able to buy insurance because they could not afford the premiums on their own.”

And HCAN’s August recess plans get a little love in the LA Times via the Associated Press: 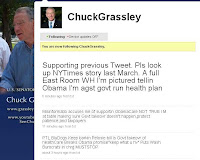 I’ve made no secret of how much everything about Chuck Grassley’s using Twitter bothers me, but does anyone else find it particularly disturbing that a U.S. Senator doesn’t know the difference between patients and patience?

Take a look at his latest rant:

Looks like I am not alone in noticing the ignorance. From Media Matters:

Sen. Grassley Has Abandoned Bipartisanship (And The English Language)