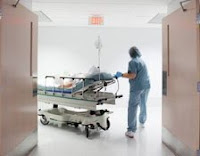 No explanation can do this justice. Just read it. Then pass it around. From Jacob Hacker and Rahul Rajkumar for The New Republic:

Afraid of the public option? This is what America will look like without it.

I’m hard-pressed to pick a favorite snippet because the whole article is just that good, but here’s a little something:

Look a little further down the road. It’s been three years since the president signed the bill. Despite high hopes, the patchwork of federal and state insurance regulations created by the legislation isn’t working. The worst abuses–such as revoking policies of people who thought they were covered after they’ve run up big medical bills–have largely ended. But private insurers continue to ration care in arbitrary ways that put their profits before patients, and many Americans still can’t obtain or afford private insurance that promises them health security. The basic problem is that the regulations stand alone, without the auxiliary precaution of a public health plan whose mission is to improve the quality and cost-effectiveness of care.

Those with chronic conditions or nearing retirement age who are self-employed or work for small businesses are hit hardest. A 59-year-old self-employed man with diabetes, or a 48-year-old single mother with breast cancer who works at a small retailer–these are the sort of people who will fall through the cracks without a public plan available in all parts of the nation. They may qualify for a “hardship exemption” so that they are not compelled to buy insurance under the reform legislation’s “individual mandate.” But not being forced to buy insurance they can’t afford is a poor substitute for having access to a public plan they can afford.