“Today, President Obama unequivocally reaffirmed his commitment to a public health insurance option as part of comprehensive health care reform this year. We believe too that a national robust public health insurance plan that is ready on day one is central to lowering costs, injecting competition into the health insurance market, ensuring access to care in every corner of the country, and keeping the insurance companies honest. We look forward to working with the President and Congressional leadership to accomplish these goals.”

Statement from the President on Health Care Reform

“I am pleased by the progress we’re making on health care reform and still believe, as I’ve said before, that one of the best ways to bring down costs, provide more choices, and assure quality is a public option that will force the insurance companies to compete and keep them honest. I look forward to a final product that achieves these very important goals.” 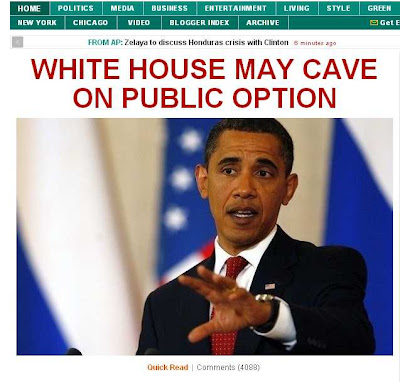 The headline links to today’s WSJ article that reads:

Mr. Emanuel said one of several ways to meet President Barack Obama’s goals is a mechanism under which a public plan is introduced only if the marketplace fails to provide sufficient competition on its own. He noted that congressional Republicans crafted a similar trigger mechanism when they created a prescription-drug benefit for Medicare in 2003. In that case, private competition has been judged sufficient and the public option has never gone into effect.

Untrue. The Medicare part D trigger was designed never to be pulled. It only mandates a public option be introduced if there are less than two private competitors in a market. It says nothing about price or quality or access. It’s a handout to insurance companies and drug companies. It’s rotten for consumers. But wait, there’s more:

On Monday, Mr. Emanuel said the trigger mechanism would also accomplish the White House’s goals. Under this scenario, a public plan would kick in under certain circumstances when competition was judged to be lacking. Exactly what circumstances would trigger the option would have to be worked out.

94% of the health care markets in this country are considered ‘highly concentrated,’ meaning one or two large companies control access and set prices and determine what they will and won’t cover. Every 30 seconds, someone in this country declares bankruptcy due in part to medical debt. How bad does it have to get before we do something substantial. No more wait and see. The insurance companies have had years to get their act together. In 1993/94, they said, “There has to be a better way.” Really? Where’s that way? Because they’ve managed to run health care in our country into the ground.

No more “if they can’t do it.” No more “one last chance.” We need to fix it now and fix it right.