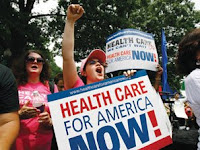 Jacki Schechner, a spokeswoman for the progressive group Health Care for America Now, said, “It’s very clear that the Republican goal is to kill health care reform and they will do everything they can to stall and delay. They have no intention of creating reform that will actually work for the people of this country. They’re more interested in political tactics and loaded talking points.”

The title of the piece is Republicans search for health language which I think is very telling.

When you have a real plan, you don’t have to hunt for rhetoric. I’m just saying.

Also from Politico tonight – the latest on likely timelines:

The Finance Committee has struggled to find consensus on paying for the $1 trillion overhaul bill, although Grassley told reporters Monday that the committee would release a bill later this week. The House is more likely to approve a bill before it adjourns July 31.

White House Press Secretary Robert Gibbs suggested the president would ask lawmakers to forgo their August recess to work on the bill.

“I’m sure the president will encourage them to continue to stay and do what needs to be done in order to have that happen, understanding, again, that this is a big priority of the president,” Gibbs said.

Rangel promised to mark up the House health care bill this week, and Baucus told the president that he would mark up the Finance Committee bill next week – something that Rangel said he thinks will help reassure House Democrats that the Senate will act.

We expect to have a House bill tomorrow. HELP markup will be done soon, and if Baucus and Grassley can get it together, we’ll finally have movement out of Finance this week. Considering the lift, it all sounds pretty much on track to me.