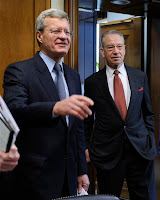 I’ve known about this for a couple of days but forgot to pass it along. One little frustrating factoid:

…a bipartisan group of Senators from six of the smallest and whitest states in the country are holding health care hostage on the Senate finance committee.

The Senators “negotiating” health care reform represent “less than 3% of the population and only 1.6 million non-whites.” (TPMCafe)

Max Baucus is the leader of the group (and chairman of the Senate Finance Committee). He’s from Montana, where the people are outnumbered by bears.

There’s Chuck Grassley from Iowa (where just last year he cut the ribbon on the state’s first escalator), and Mike Enzi, from Wyoming, which has a smaller population than the District of Columbia. There’s Olympia Snowe from Maine, which, back in my day, was a part of Massachusetts, and really should have stayed that way. There’s Jeff Bingaman from New Mexico, almost every square inch of which is covered by uninhabited desert, forests, craggy mountains or salt flats. And finally there’s Kent Conrad, from North Dakota, which is so forlorn it makes South Dakota seem like Southern California.

For even more context, Joel points to Matt Yglesias who notes:

Collectively those six states contain about 2.74 percent of the population, less than New Jersey, or about one fifth the population of California.