Someone tipped me off to a recent quiz about health care reform linked off the CNN.com homepage. Question 2 was this: 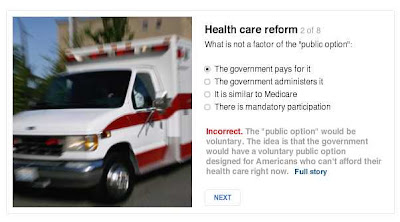 People would pay premiums the same way they would to private insurance. The option is covered 100% by premiums. There is $2 billion in start-up funding, but that’s all paid back in the first 10 years. It’s completely self-sustaining after that.

I sent a note to Elizabeth Cohen (because I heard she repeated this mistake on the air) and to an online producer I know. The latter got back to me and said he passed my note up the food chain. I haven’t heard back from Elizabeth yet. I don’t mind as long as she and the rest of the network start reporting the facts correctly.

The public option’s taking enough heat as is. It’d be nice if the press didn’t contribute to the misinformation train by not doing its homework.