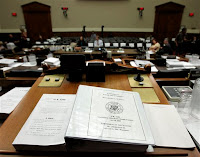 If they’re going to name the final healthcare reform bill after Senator Kennedy, we ought to be demanding with voices as powerful and booming as the late senator’s…

The bill must not suck.

But if it does, they should perhaps name it after Max Baucus and Chuck Grassley. The Blame Baucus and Grassley for This Sucky Act bill.

He goes on to explain what a lousy bill looks like:

Without a public plan, mandates would transform what would otherwise be a landmark reform bill into a massive and perpetual handout to the healthcare industry. You and I would have no choice but to pay a monthly tribute to the worthless bastards at UnitedHealth, CIGNA, Aetna and Blue Cross every month until we died, went broke or reached the age of 65.