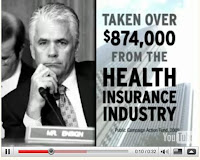 Our Ensign ad is generating some press:

Airing starting Monday, in Las Vegas and Reno: Health Care for America Now is up with a new TV ad targeting Sen. John Ensign, R-Nev., a member of the Finance Committee (and, as the ad gently reminds us, someone who’s been in the news for some other reasons as well). “Lately there’s been a lot of controversy about John Ensign… Why did John Ensign side with the insurance companies instead of us? Follow the money.”

Ensign is a member of the Senate Finance Committee that is scheduled to vote on the bill this week.

The $110,000 ad buy comes from Health Care for America Now, an umbrella organization that supports including the public plan option as part of health care reform.

The public plan would be a government-run insurance option that would compete with private insurance plans to cover the uninsured. Opponents call it socialized health care.

The ads are unlikely to sway Ensign, who has strongly opposed the legislation that he calls a government takeover of health care. But they may hit at the Republican Party in Nevada, which has struggled with electoral losses, fallout from Ensign’s affair and organizational problems.

Nevada Sen. John Ensign, who isn’t up for reelection until 2012, is the target of a new ad campaign focused on his role in health care reform.

The ad, however, also hints at Ensign’s affair with a former staff member, in its opening line, “Lately there’s been a lot of controversy about John Ensign.”

HCAN might be getting twice its money’s worth: Nevada’s other senator, Harry Reid (D), is predicted to face a tough reelection battle in 2010–a race rated as a “toss-up” by the Cook Political Report–and as Senate majority leader, he’ll face the daunting task of shepherding a viable health care bill through the Senate floor, and with it, lots of pressure to compromise. From the liberal perspective, the less of that pressure, the better. A public option is supported by Nevadans, according to Research 2000–and stirring that stew a little bit couldn’t hurt.

HCAN says it wanted to pick a Republican on the Senate Finance Committee to make an example of, and that it decided on Ensign even before the latest indiscretions broke (which made him an even riper target). But with this ad, HCAN might be getting the benefit of a double dip.

In other news, 6 protesters – our peeps – got arrested today in Minneapolis. Star Tribune:

Six demonstrators were arrested Monday morning at UnitedHealth Group headquarters in Minnetonka after they blocked the doors and refused to leave during a health care reform protest.

About 110 protesters sang and spoke about the need to change the way health care is financed in the United States, and said that insurers alike UnitedHealth are making people sicker because the system doesn’t offer proper coverage for many patients.

And in “clearly you have to get arrested to make news” news, take a look at this Columbia Journalism Review write on the general lack of media coverage of our anti-insurance campaign as a movement:

The reformers face a fundamental imbalance. Insurance companies don’t need street protests to get heard in Congress. But HCAN faces a social movement’s eternal problem of how to attract public attention without looking like disturbers of the peace.