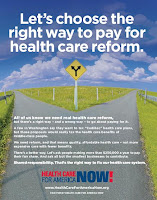 Another new HCAN ad campaign starts today (I told you I was busy).

We’re taking on the excise tax on higher premiums health insurance plans. Click through to read the press release.

To break it down in the simplest of terms:

The Senate Finance Committee bill pays for part of reform by taxing so-called “Cadillac” plans. So for plans costing more than $8,000 for a person or $21,000 for a family, the insurance company gets taxed on the money ABOVE that threshold at a rate of 40%. But we all know – and insurers have said – they will pass the burden of that tax on to the policyholders by jacking up premiums even more or changing how much people have to contribute out-of-pocket. (b/c they certainly aren’t going to take a hit on their own profits).

So this tax is really just a tax on the insured -not insurers. And it will hit certain workers especially hard – those in high cost cities (where the cost of living is higher so even middle-of-the road insurance plans cost more), those who are part of an older workforce (so again, insurance costs more), those who live in states with few insurers so they have little choice but to pay for what’s offered, or those who have negotiated better health care plans in lieu of pay raises over the years.