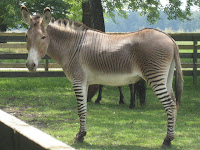 First one comes from my brother out in California. Dan wrote:

Authorities were tipped off when she made it from the ticket counter to her gate in 4.2 seconds:

MADRID, Spain (CNN) — A 92-year-old woman with cocaine strapped to her body flew all the way from Brazil to Spain before police arrested her, in a wheelchair, at Madrid’s airport.

They found 4.3 kilos, or nearly 9.5 pounds, of cocaine packets strapped to her legs and torso, and also arrested a 44-year-old female companion, who tried to escape on another plane, a Civil Guard spokeswoman told CNN Tuesday.

BROOKSVILLE, FL — What do you get when you cross a zebra with a donkey? James Oleson says you’ll get knocked to the ground and bitten.

Oleson told deputies he was painting a perimeter fence near the donkey’s enclosure when the donkey put his head underneath the fence and began to bite his feet.

With his mother’s help, Oleson was able to get away from the “zonkey”. He suffered numerous bite marks on his lower legs.

Boyett Groves is a small attraction with exotic animals for tourists to see up close.