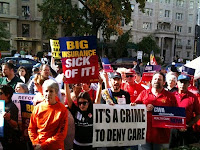 Our anti-AHIP event was a huge success yesterday. One top health insurance lobbyist gave us a gift in the morning when he said the following (HuffPo):

“There is absolutely no interest, no reason Republicans should ever vote for this thing. They have gone from a party that got killed 11 months ago to a party that is rising today. And they are rising up on the turmoil of health care,” said Champlin. “So when they vote for a health care reform bill, whatever it is, they are giving comfort to the enemy who is down.

Does anyone still believe we’re dealing with a kinder, gentler health insurance industry all in favor of reform? That’s assuming anyone ever really did.

Then we held our presser at 2:30pm just two doors down from the AHIP conference, and the seven speakers could not have been more powerful. One woman in particular – Georgeanne – won over the room when she spoke about her brother Billy. Billy died of a heart attack in March. He had an irregular heartbeat and a defibrillator. When he lost his job, he lost his health insurance and couldn’t get coverage on the individual market because of his pre-existing condition. When his defibrillator ran low on juice, he couldn’t afford the $10,000 to replace it, and his doctor wouldn’t help him without health insurance or the money up front. Billy – a lifelong Republican who had never voted for a Democrat – voted for Obama in November because (as Georgeanne recounted) he believed health care reform could be the miracle that would save his life. Billy died of a heart attack two months after inauguration.

Congressman Mike Doyle (D-PA) is Georgeanne’s representative and came to stand with her and champion reform. He too teared up when he spoke about Billy and explained how the health reform legislation he expects to pass the House will guarantee no one in America has to suffer like that again.

After speaking, the families walked outside to meet 600 people rallying in solidarity. Here’s a video of the event:

And is some of the other press attention from yesterday:

Lantz and members of six other families shared stories of denied care Thursday and later joined hundreds of people protesting the private health insurance industry outside the same hotel where the industry’s trade group, America’s Health Insurance Plans, was holding a conference. The event was organized by Health Care for America Now, a group that supports a government-run “public” health insurance option as part of health care reform.

“But when you look at what’s going on from the perspective of a person who’s being failed by the insurance companies, this in a very real way is health rationing and death panels — for profit,” Lantz, 58, said during an interview. 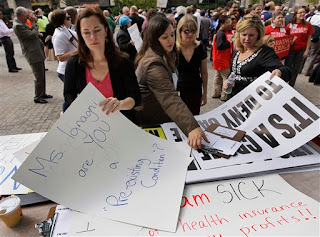 SEABROOK: Also, here’s Kevin Scott. He’s got a scar that runs clear over the top of his head.

Mr. KEVIN SCOTT: It’s brain cancer, a brain tumor, and I can’t pronounce the correct term, the medical term, but it was the same one that Ted Kennedy had.

SEABROOK: Scott says he’s actually grateful that his insurance paid for his brain surgery, but now that he’s in chemotherapy and radiation, he says he feels like he’s being nickled and dimed.

Mr. SCOTT: When I had radiation treatment, I had some skin irritations. So I went to see a dermatologist about that. They won’t cover that.

The NPR story could not be more perfect. Listen to the whole thing here.