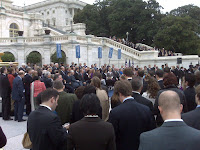 The House introduced its health care legislation called The Affordable Health Care for America Act during an event on the Hill this morning. Here is our official statement. The image to the left is from that event.

The public health insurance option is the key to lower costs, real competition in the insurance marketplace, and true choice for consumers.

It is set up by the federal government but paid for through premiums the exact same way private insurance is paid for.

It is not profit-driven and not beholden to Wall Street investors so it can prioritize people’s health care needs over excessive financial gain.

It won’t need to make money to spend on marketing, advertising, lobbying, corporate perks, pricey overhead, or CEO salaries and bonuses, and it won’t need to appease shareholders.

A government body sets policies and bears the risk for paying claims.

Consumers who choose the public option pay premiums the same way they would to a private health insurance company.

It operates under the same rules and regulations as private health insurance companies that want to participate in the exchange or marketplace.

It offers a set of comprehensive benefits, same as the other private plans in the exchange.

WHAT IT WILL DO:

A public option will introduce competition across the country. One nationwide plan will constrain costs and make the other insurers think twice about passing down a double-digit rate increase to customers.

The public option will set a benchmark so people will finally know if they’re getting what they should be for their premiums.

Consumers will finally have options and alternatives. Not only will they be able to choose the public option, but they will be able to compare and contrast private plans in the exchange. And when these private plans have to compete with a public option that’s less expensive and more transparent, they’re going to have to clean up their act.

It will give us a system of checks and balances to make sure our one-half trillion investment in tax subsidies for Americans isn’t just lining the pockets of these big corporations.

Today’s insurance market is incapable of bringing down costs for families and slowing cost growth over time.

There is a serious lack of competition in the health insurance market. In 94% of markets, just one or two large companies have control. So instead of competing for your business through lower costs and better service, they compete against one another to drive up prices to see what the market will bear because they know people have nowhere else to go.

Insurers find their way around insurance rules today. Rules aren’t enough. Insurers find it more cost effective to break the rules and pay fines than to play by the rules.

For example, Attorney General Andrew M. Cuomo conducted an industry-wide investigation early last year and found health insurers were defrauding consumers by manipulating reimbursement rates and saying patients owed more out-of-pocket than they really did. Insurers were using a database called Ingenix which was owned by UnitedHealth. UnitedHealth agreed to settle a class action lawsuit with doctors and patients for $350 million and pay $50 million towards a new database. Amount of money saved by years of overbilling consumers? Upwards of $500 million.

p.s. For all of the crazies who scream “Read the Bill” or “Let Us Read the Bill,” have at it. It’s all online here.