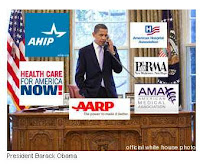 I have no good excuse for not posting anything yesterday other than being busy and losing track of the fact that I hadn’t contributed until I was too tired to care anymore.

How’s that for blunt?

Anyway, for your reading pleasure today, here’s a cool TPMDC post on six big players in the health care debate. HCAN gets some love:

There are more pro-reform groups working to pass a bill–unions and consumer groups and health care issue organizations and so on–than a single journalist could possibly describe. Some have played the inside game (the Service Employees International Union), others have been less beholden to the White House’s line (AFL-CIO) but dozens of them, from across the spectrum, aligned under HCAN’s wide umbrella. HCAN has spent millions of dollars on a campaign for a comprehensive health care bill. To the extent that liberals and reformers have a single basic understanding of what constitutes a public option, it’s because HCAN defined it and helped organize around it. HCAN’s efforts haven’t been as punchy as some of the more liberal groups would have liked, or as passive as the Obama administration might have preferred. But the group has the ear of the White House and key players in Congress, and has used that access at times to great effect.