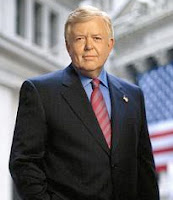 BREAKING: TVNewser has heard from multiple sources that Lou Dobbs will announce he is leaving CNN on his program tonight at 7pmET.

A CNN spokesperson could not confirm nor deny that Dobbs would make an announcement about his future at CNN or that he will be leaving the network.

We will be watching and updating.

Update: The NYTimes confirmed with an executive that Dobbs will “announce his resignation,” which is “effective immediately,” and that the show tonight “will be his last on CNN.”

This will be my last broadcast here on CNN, where I’ve worked for most of the past 30 years, and where I have many friends and colleagues whom I admire deeply and respect greatly. I’m the last of the original anchors here on CNN and I’m proud to have had the privilege to helping to build the world’s first news network. I’m grateful for the many opportunities that CNN has given me over the many years. I’ve tried to reciprocate with a full measure of my ability and my energy.

Over the past six months it’s become increasingly clear that strong winds of change have begun buffeting this country and affecting all of us, and some leaders in media, politics, and business have been urging me to go beyond the role at CNN and to engage in constructive problem solving as well as to contribute positively to the great understanding of the issues of our day. And to continue to do so in the most honest and direct language possible. I’ve talked extensively with Jonathan Klien, he’s the president of CNN, and as a result of those talks, john and I have agreed to a release from my contract that will enable me to pursue new opportunities.

At this point, I’m considering a number of options, and directions, and I assure you, I will let you know when I set my course.

UPDATE: Chez says Fox. You should check in with Chez whenever news breaks on this one. He’s bound to have the funniest stuff around.

One thought on “Wow”