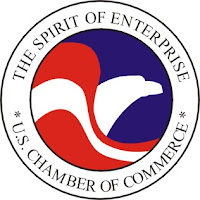 We got to have a little fun with the Chamber of Commerce today.

Here’s where the story starts (from The Washington Post – emphasis mine):

The U.S. Chamber of Commerce and an assortment of national business groups opposed to President Obama’s health-care reform effort are collecting money to finance an economic study that could be used to portray the legislation as a job killer and threat to the nation’s economy, according to an e-mail solicitation from a top Chamber official.

The e-mail, written by the Chamber’s senior health policy manager and obtained by The Washington Post, proposes spending $50,000 to hire a “respected economist” to study the impact of health-care legislation, which is expected to come to the Senate floor this week, would have on jobs and the economy.

Step two, according to the e-mail, appears to assume the outcome of the economic review: “The economist will then circulate a sign-on letter to hundreds of other economists saying that the bill will kill jobs and hurt the economy. We will then be able to use this open letter to produce advertisements, and as a powerful lobbying and grass-roots document.”

Thanks to CAF, we’ve already got the ‘hundreds of other economists’ the Chamber’s looking for, and they’ve all already signed on to a letter. Unfortunately for the Chamber, it’s a letter expressing support for health care reform. An excerpt:

We, the undersigned economists, business leaders, and health care experts, urge the new President and Congress to reform America’s health care system—to move boldly to cover all Americans with health insurance, to bring down health care costs and create improved quality and value within the health care system for families, businesses, and taxpayers.

Some have argued that we cannot afford health insurance coverage for all because of the economic crisis. But solving America’s big health care problems is essential to economic recovery. We need to cover everyone now as part of comprehensive reform to rebuild our economy and restore prosperity. Affordable coverage with good benefits will give cash-strapped lower and middle-income Americans greater financial security – and the ability to pay their mortgages, start small businesses, save for college, pursue new job opportunities, and make other choices that will benefit our economy. And it will help business owners to insure their workers. Ensuring health security for all will allow workers to move to those jobs that fit them best, not just those that provide health insurance, promoting entrepreneurship and labor market productivity.

The rest of the letter is here. It was sent to the White House and Congress in June. Today, we pushed out a press release with the following quote:

“Since the Chamber has put out a help wanted ad, we thought we could be of some assistance,” said Richard Kirsch, National Campaign Manager, Health Care for America Now. “If the Chamber would like the phone number of any of these economists or business leaders, we would be happy to provide it to them.”

The whole release is here.