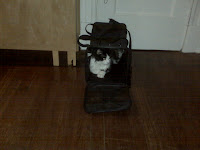 Emmy and I are back in DC.

(I have yet to unpack. She refuses to unpack herself.)

Once I’m mostly caught up, I’ll fill you in on the health care front. In the meantime, a couple of notes to kick off the week –

Krugman’s got a blurb on the new CBO report that’s pretty good.

And I caught this write in the Miami Herald this morning. Infuriating stuff:

Top Florida lawmakers are balking at Congress’ plans to help more poor people get healthcare, though they’ve protected an entitlement of their own: free insurance premiums.

Taxpayers have been stuck with covering the premiums — at a cost of about $45 million a year — even while lawmakers pledged to scrimp as they grappled with three straight years of budget shortfalls.

Florida doesn’t limit the subsidies to statewide officeholders like Gov. Charlie Crist and Chief Financial Officer Alex Sink, or to legislators like Senate President Jeff Atwater and House Speaker Larry Cretul. About 27,479 state employees — many of them high-level bureaucrats and political appointees — also get the break. So do their families.

The governor plans to add his wife of nearly one year, wealthy businesswoman and philanthropist Carole Crist, as well as her two daughters from a previous marriage to his health plan on Jan. 1. The girls attend an all-girls private school in New York and live with their father, who owns a jet-rental company.

“There is not a residency requirement for coverage,” explained Crist spokesman Sterling Ivey.