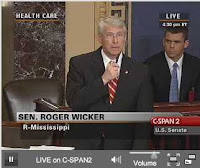 There’s another argument on the floor right now about the overpayment cuts to Medicare Advantage plans. Senator Wicker (R-MS) is claiming those cuts would mean seniors that have Medicare Advantage won’t get to keep what they have if they like it.

Senator Dodd points out that private insurance companies will make less money, but it’s totally up to them how they compensate for that. Do they cut benefits for seniors, or do they lower salaries or profit margins or adminstrative expenses or shareholder payouts? It’s in the hands of the insurers, not Congress. If he cares about seniors so much, Senator Wicker should be going after the insurance companies, demanding they don’t cut benefits or benefit plans to make more money.

Senator Dodd goes on to explain that the bill protects seniors from Medicare Advantage plans that raise their premiums too high or cut their coverage too low to protect profits. They’ll have to abide by standards or not be allowed to participate in offering Medicare Advantage at all.

Senator Baucus then adds the bill provides even more Medicare guaranteed benefits than seniors get now. The only things that might be trimmed back are the excesses – like gym memberships – but that’s still only a maybe since private insurance companies decide how to accommodate for not getting overpaid anymore.

It was a good exchange.