I’ve learned my lesson. I am not going to comment on this one. I’m just reposting. 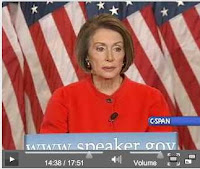 Q: Madam Speaker, as you well know, the Democrats in the Senate have come to a tentative deal to drop what everybody knows as the public option from their health care bill. You have said there is, quote, no way I can pass a bill in the House of Representatives without a public option. Is that still the case?

Speaker Pelosi. Well, what I said — it is a two part statement that quotes what the President has said. We believe, we in the House believe that the public option is the best way to hold insurance companies honest — to keep them honest and also to increase competition. If there is a better way, put it on the table.

As soon as we see something in writing from the Senate, we will be able to make a judgment about that. But our standards are that we have affordability for the middle class, security for our seniors, closing the donut hole and sustaining the solvency of Medicare. Responsibility to our children, so not one dime is added to the deficit. And accountability of insurance companies. We will take a measure of that bill in those regards.

Q: From what you know of what the Senate is doing, do you think — there have been some pretty positive statements from some of the most liberal members in the caucus.

But between their bill and our bill, I know one thing for sure, we will have a great bill when we put them together.

The public health insurance option died on Thursday, December 10, 2009, after a months-long battle with Senate parliamentary procedure. The time of death was recorded as 11:12 a.m. Eastern Standard Time.

Its death had been rumored numerous times over the past year, but the public option repeatedly and defiantly battled back. The Senate’s insistence on 60 votes, combined with President Obama’s decision not to intervene on its behalf, eventually proved overwhelming.

Ok, I’ll kind of comment. The way it should be written:

While expressing enthusiasm for the Medicare buy-in, House Speaker Pelosi isn’t ready to sign onto the Senate compromise yet.

She also showed some flexibility on the public option, but is still in wait-and-see mode…

Without commenting directly on the tentative Senate deal, Pelosi told reporters, “There’s certainly a great deal of appeal about putting people 55 and older on Medicare” – one plank of the pending compromise to gut a controversial public option.

“These bills are perhaps 75 percent compatible,” she said.

Of course, the remaining 25 percent includes not-so-little issues, like abortion funding, immigration, when the new programs begin, when – and how far – to close a gap in prescription-drug coverage under Medicare and whether to provide optional government-sponsored insurance, among other things.