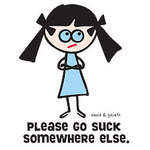 Anne Kornblut on Morning Joe talking about her new book, gender considerations in the 2008 election, and decisions facing the Clinton campaign:

I’ll give Anne the benefit of the doubt and say she didn’t mean to be a complete dolt, but if she believes being tough makes you less of a woman, then she needs to get a clue.

I know she probably meant something less offensive, but if she’s going to be on TV pimping her book on gender and politics, she needs to choose her words more wisely, or she’s going to piss off a lot of tough women.

Speaking of ridiculous females, I watched the premiere of The Bachelor the other night at the urging of a friend who insists it is the guiltiest of guilty pleasures. We met the women about 15 minutes into the show, and I was immediately embarrassed to be a woman. The guy was kind of a tool too, but that was secondary to the pathetic display of desperation on behalf of the women claiming to be looking for love.

What they need to be looking for is a good therapist and a little more self-respect.