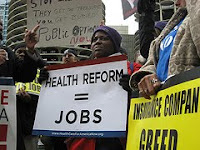 Washington, DC – On Tuesday January 26th at noon, more than a dozen families victimized by health insurance abuse will join health care reform supporters for a protest at the U.S. Chamber of Commerce building. Many of the survivors of insurance abuse will be joined by organizational leaders in risking arrest at the U.S. Chamber of Commerce building to show their disgust with the Chamber’s extensive efforts to fight comprehensive health care reform, including its laundering tens of millions of dollars for the health insurance industry. The DC protest, on the day before the State of the Union address Wednesday night, will urge the President and Congressional leaders to continue their fight for health reform that will guarantee good coverage to all.

More than a dozen families from around the country are coming to DC to tell their stories of denied care and atrocious mistreatment by the private health insurance industry. They will press Congress to stand with them no matter the unlimited spending by big corporations and special interests.

As the President prepares his address and Congressional leaders weigh how to fulfill their commitment to fix our broken health care system, the families and the pro-reform community will call on their elected officials to reaffirm their support for doing what’s best for people’s health care needs, standing up to special interests and corporate lobbyists, finishing comprehensive health care reform now, and finishing it right.

WHEN: Tuesday January 26th at 12pm