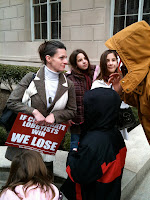 Stacie Ritter brought her 4 children to DC today to speak out in front of the Chamber. She’s has been a tremendous advocate for reform, and we are lucky to have her be so brave and so outspoken. She and her twins are going to be on Dylan Ratigan‘s show on MSNBC at 4:30pm today. While we were chatting before they all left for the studio, Stacie’s other daughter Abigail made this sign: 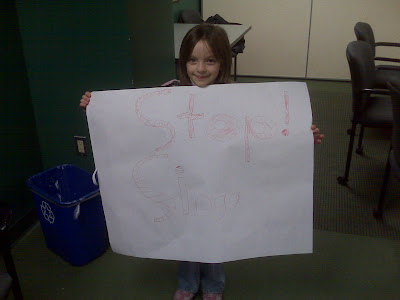 It was supposed to be “Stop CIGNA,” but it reads “Stop! Singa.” She’s so adorable that it’s close enough for me.

UPDATE: Apparently, the Singa is actually something important. I did not know this. I assure you Abigail didn’t either. She does, however, know what CIGNA is. She’s 6. How sad is that?

Here’s Stacie’s story in case you are not yet familiar:

Stacie Ritter, 36, from Lancaster, Pennsylvania is the mother of twin daughters, now 11, who were diagnosed with leukemia when they were four. Both girls needed stem cell transplants and other cancer treatments. The twins survived, but the glands controlling their growth were damaged. Doctors recommended that they receive daily growth-hormone injections. But Stacie’s husband’s company had switched to CIGNA for health insurance, and CIGNA refused to cover the hormone shots. With $30,000 in medical debt, a mortgage, her husband’s brief unemployment and food costs, the family of six filed for bankruptcy in 2003. The twins now get their growth hormone drug free from Eli Lilly. But the family still pays about $2,500 a year in premiums to CIGNA, plus a $650 co-pay for an annual cancer survivorship visit.