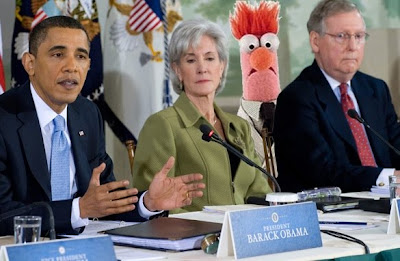 (If you made this and want credit, let me know. It was sent to me sans credit.)

Since we had a previously scheduled activity that could not be skipped, I am currently watching the President’s Health Care Summit from the confines of a slightly bizarre undisclosed location. But I am definitely watching. The whole thing.

You can too. Here’s a link: 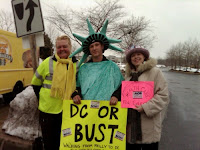 I recognize blogging’s been abnormally slow, but I have a good reason. Work’s picked up again, and we’re currently in the final prep stages for this tomorrow:

If you want to join, you can sign up online here or just come.

The NYT columnist is spot-on today:

By the way, columns such as this one about health care reform are out-of-network. Your insurance plan fully covers columns about many important topics, such as nephrology and Gregorian chant. But politics, health care, international affairs and anything that I might actually write about are all out-of-network.

So I’ll be billing you soon. I’ll tell you how much after you’ve read the column. Don’t worry: the invoice will clearly lay out cost codes, footnoted in cuneiform.

This is kind of neat. I went to ABC to tape an interview for World News with Diane Sawyer last week during the snowstorm, but the piece never aired so I figured it was dead and buried. Turns out they were saving the information for a less rainy day. My part’s on page 2:

Critics of the companies don’t buy it. “While everyone else seems to be in a recession, the private health insurance companies are making a tremendous amount of money,” said Jackie Schechner, the National Communications Director for Health Care For America Now.

How could that happen? Schechner says the companies essentially get rid of customers who aren’t going to make them any money — old, sick, or high-risk patients. That way, healthy customers are still paying high premiums but the insurance companies have to make fewer big payouts. If that accusation were true, the companies could be in violation of the law.

“They raise rates and companies can’t afford to cover their employees anymore” says Schechner. “People try to go out and get insurance in the private market and it’s just entirely unaffordable for them because the prices of premiums are so high. And if you can get something you can afford and the premiums are low, chances are it’s going to be lousy coverage and it’s not going to actually give you the health care benefits you need.”

Schechner says the answer is health care reform. That’s one point that the critics and insurance companies can agree on. Brad Fluegel of Wellpoint said, “We’re eager to have a fact-based, rational debate about the drivers of these issues and what we can do to fix them.”

The trouble is that the insurance industry and the Obama administration have very different ideas about what that reform should look like. 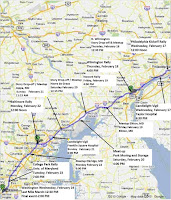 I think this is probably the longest I’ve gone without updating in a while. It’s been a combination of lack of motivation and excessive distraction.

On the personal front, I spent three hours learning to rock climb on Sunday. I took a class at an indoor gym and was surprised to discover the climbing itself was easy. The knot-tying and belaying – not so much. The instructors let us bring home a practice rope, and I’ve spent the last couple of days perfecting my figure 8 and back-up knots. I think I’ve got them down now. The belaying part is going to take more time in the gym with an extremely patient partner.

On the work front, I’ve been focused on getting materials together for this:

Health Care for America Now (HCAN) – the nation’s largest health care campaign – in conjunction with tens of thousands of local partners and progressive advocates nationwide are starting a week-long push insisting Congress act now on health care reform and listen to everyday Americans, not the insurance lobbyists who are spending millions to block health care reform and protect their profits. Organizers are holding nearly 40 events in 32 states between the 17th and the 24th.

The flagship event of the week is the “March to the Finish Line for Melanie” – an eight-day walk which starts in Philadelphia, PA on Wednesday the 17th and will end in Washington, DC on Wednesday the 24th – the day before President Obama’s Health Care Summit. The march is named for Melanie Shouse, a health care advocate who just lost her long battle with breast cancer after missing out on treatment because she did not have access to good, affordable health insurance.

You can learn more about the march and follow it online at the Melanie’s March website (http://melaniesmarch.com/).

To find an event in your area, go to FinishReformRight.com. 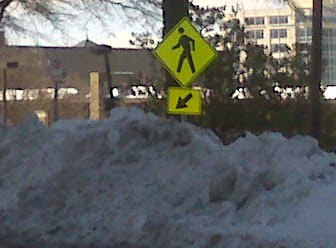 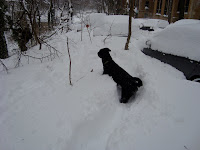 It’s been three days of working from home, and I’ve had enough. I hate being stuck inside. I did venture out for a bit yesterday, but it was nothing short of freezing. I also flaked on posting here yesterday. Sorry. Pun intended.

Contrary to possible belief, time away from the office does not mean time off. We held a press conference call today to debut a new report. You can read the whole release here. You can download the report here. The gist is here:

The five largest U.S. health insurance companies sailed through the worst economic downturn since the Great Depression to set new industry profit records in 2009, according to a new report released today by Health Care for America Now (HCAN), the nation’s largest health care campaign. The health insurance industry accomplished this feat by leaving behind 2.7 million Americans who had been enrolled in private health plans the year before. For customers lucky enough to keep their benefits, the insurers raised rates and increased cost-sharing while – in many cases – cutting the share of premiums spent on medical care.

Executives and shareholders of the five biggest for-profit health insurers, WellPoint Inc., UnitedHealth Group Inc., Aetna Inc., Humana Inc., and Cigna Corp., enjoyed combined profit of $12.2 billion in 2009, up 56 percent from the previous year. It was the best year ever for Big Insurance.

I did an interview for ABC World News but no word yet on whether or not the piece will make air. I know well that it’s never a guarantee.

The top guy’s got broccoli eyes. The bottom one’s eyes are made out of falafel. 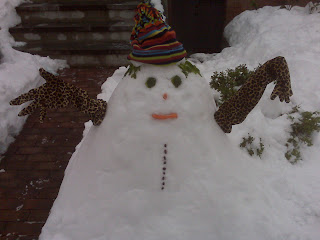 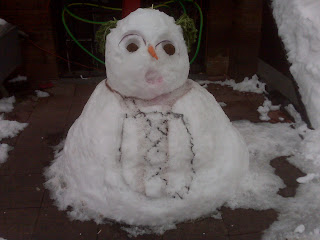 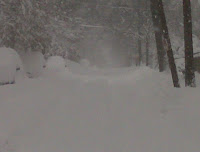 Happy Monday. Turns out the weather experts finally got one right. We endured quite the brutal snow beating this weekend. I took the photo to the left on my hike home from a friend’s house Saturday at about noon.

DC’s not well-equipped to handle inclement weather. The streets and sidewalks that are passable are slick and slushy at best, and the city’s far from dug out. Metro’s running sporadically and only to and from the underground stations. My commute’s not bad, but half the office is working from home.

Rumor has it we’re due for another 5-10 inches tomorrow. That should make things interesting.

On the health care front, this is all the news today:

President Obama said Sunday that he would convene a half-day bipartisan health care session at the White House to be televised live this month…The idea for the bipartisan meeting, set for Feb. 25, was reached in recent weeks, aides said, as part of the White House strategy to intensify its push to engage Congressional Republicans in policy negotiations, share the burden of governing and put more scrutiny on Republican initiatives.

Richard’s been chatting with reporters. From TPMDC:

“If this is what it takes–if doing this will make Democrats say, ok, go ahead and use their majorities to pass reform, then do it,” said Richard Kirsch, director of the reform campaign Health Care for America Now.

Kirsch says Democrats have to remember that this isn’t going to make Republicans any less intransigent. “They’re still going to vote no,” he said. “Their entire political strategy is to burn the House down, whether or not people get caught inside.”

“The point is, if it’s helpful to clarify for people, remind people, that Republicans don’t have ideas to really address the health care problems, and will say no to anything–if it does that it’s good,” Kirsch said. “If this is helps, then so be it. But at this point its up to Democrats to use their majorities to pass reform.”

And that’s basically what aides in both the House and Senate think: that the meeting can be used to clearly differentiate who is fighting for what, while deflating the GOP charge that the reform process has been too secretive.