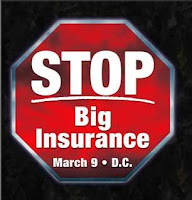 I’m slowly coming to grips with the reality that daily blogging is no longer feasible – at least for the time being. I’m short-staffed and overloaded at work, and the last thing I want to do at the end of the day is get back online.

I’ve always been so proud of my ability to keep up this site and definitely have felt guilty as the quantity and quality of posting has been tapering off.

That said, I still intend to make an effort. I just expect my contributions will be less prolific and slightly less profound than those to which you’ve grown accustomed.

But enough of the caveats. On to the content.

Here’s some stuff you may have missed in the past few days:

First, I did watch the Health Care Summit in its entirety. Doing so was more complicated than it needed to be because where I was watching didn’t get CSPAN-3, and no one cable network would carry the thing from start to finish. They all kept cutting away to give us totally useless analysis and insight. To call it frustrating would be an understatement. The point of the summit was to present the public with an unfiltered look at the conversation about health care reform between the President and Congress. Neither CNN nor Fox nor MSNBC could manage to keep their staff off the air and their opinions out of it.

Second, here’s the statement we put out in response to the Summit:

“We appreciate President Obama’s attempt to reach out to Republicans one more time, but today’s bipartisan summit proved the GOP is committed to little else than repeating the same stale talking points.

We need reform to be sure that Americans are not left out or priced out of the best health care available. While the President and Congressional Democrats clearly understand our health care system is broken, Republicans at the summit showed they are grossly out of touch with the everyday struggles of working Americans when it comes to their being able to get the health care they need.

It’s now time for the President and Democrats to finalize a bill, and with or without their Republican colleagues, pass legislation that works for us – not the insurance companies – and gives us all good health care we can afford.”

Third, we pushed out another important bit of information on Friday. It’s about reconciliation and how most of the media is getting it very wrong:

The idea that reconciliation is unprecedented or a subversion of Senate rules is wrong. It’s also wrong to say “health care reform” will be passed through reconciliation. In fact, the vast majority of health care reform has already passed the Senate despite an attempted Republican filibuster that forced repeated cloture votes in December.

If President Obama and Democratic leadership in Congress decide to use the budget reconciliation process to complete health care reform, they won’t be using it for the entire bill. In fact, they will only be using it for a narrow list of improvements to the bill, in lieu of a formal conference, which the Republicans have promised to obstruct.

And finally, we are ramping up for a big anti-insurance action here in DC on March 9th. Now is the time to get in gear and join us. Click here to find out more.