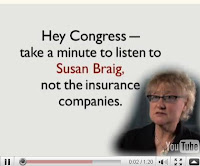 All this week, we are debuting videos of insurance abuse survivors telling their stories to prove – once again – why Congress must vote for health care reform. Today’s video features Susan Braig from Altadena, CA. She is a breast cancer survivor who is struggling financially because her health insurer has defined cancer as “chronic” not “catastrophic.”

Yesterday, we featured Matt Masterson from Virginia Beach, VA who’s been financially destroyed by medical costs. He’s only 40, and his son has diabetes. Matt says of his 17-year-old son, “He’s looking at a lifetime of hardship and battle” if we don’t do something about our health care system now.

And the first video this week spotlighted Marcelas Owens – the 11-year-old from Seattle who lost his mother because she couldn’t afford to see a doctor when she needed care the most.

In other outrageous news today, Noam Levey reports in the Los Angeles Times that WellPoint, back in 2007, promised to spend $30 million to help the uninsured. They’ve spent $6.2 million while making $10.5 billion in profits, paying their CEOs at least $28.5 million, and buying back $12.1 billion of their own stock. Here’s our release with the details and Richard’s quote on the issue:

“Ten billion dollars in profits and $28 million in CEO compensation, and yet they couldn’t meet their promise to spend $30 million over three years on the uninsured? It’s no wonder that Americans understand the insurance industry is lying when it says it’s for reform,” said Richard Kirsch, National Campaign Manager, Health Care for America Now. “They have zero interest in doing anything to expand coverage of the uninsured and only talk about it when it helps them score political points. What else are they hiding? How many stories like this do we have to uncover before we acknowledge they just can’t be trusted?