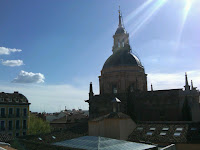 I have been in Spain for a week now. Started in Madrid and am now back in Madrid until tomorrow when I leave for the south. The photo to the left is the view from my friend’s apartment where I am staying. Beautiful.

My fellowship program with the US Spain Council was incredible. We spent 4 days in Madrid and another 2 in Barcelona having meetings and sightseeing and learning more about Spanish life and culture.

But the best part of the experience – without question – was the group of people with whom I was lucky enough to share the week. I could not have assembled a more impressive, interesting, exciting, and entertaining group had I been able to hand-pick them myself. (Though if I had hand-picked them, I definitely would have gone with the same male-to-female ratio. Mira. Can you blame me?) 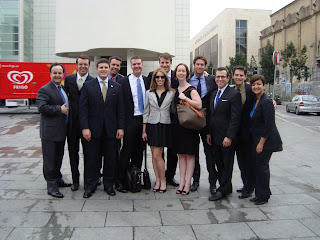 I said the two hardest things about returning to the States will be going back to eating salads or sandwiches for lunch (as opposed to gorgeous meals) and not having 8 fabulous men following me around all day.

I will start my solo travel tomorrow and then make my way back to Madrid eventually. This city feels like home the same way NYC always did. It’s extraordinary. 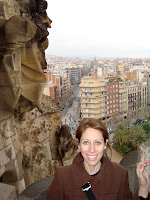 I’m heading back abroad today and am going to spend some time exploring. I will try to check in occasionally and post photos should the mood strike, but you’ll have to be patient with me. This trip is about unwinding, and that means unplugging from the Interwebs a touch. Lo siento pero es necesario.

Hasta luego. Have a good one.

You may be wondering why the slack here in blogland.

I’ve been busy planning and preparing for some pretty significant changes and just sent the following note out to press:

The end of my tenure with HCAN is fast approaching, and I just wanted to let you know whom you should be contacting now and what’s next on all fronts.

My last day with HCAN will be April 15th. When I joined the campaign in June 2008, my goal was to fight to win health care reform. With that accomplished, I’ve decided now’s the right time for me to move along. It has been an extraordinary ride, and I am truly lucky to have had the opportunity to work on something I cared about so much with so many amazing people.

As for what’s next…

I am going to be participating in a fellowship program abroad and then am planning to stay and travel a bit. I should be back in the States by mid-May and back to work in some capacity by June, but the truth is that HCAN’s going to be a tough act to follow.

HCAN will continue albeit in a slightly different capacity. There is a political narrative to be told and an important dialogue to have about reform and how it is a real victory for the public and members of Congress who stood up for their constituents against big insurance. Our Research Director – Avram Goldstein – will be adding communications to his responsibilities. I’ve assured him you will all be gentle and kind as he gets acclimated to the new gig.

He will be easing into the role over the next week or so. You can still reach out to me until the 15th, but you should expect to work with him from the 15th on.

Thank you all for an incredible couple of years. It’s been quite a run.

All the best –
Jacki 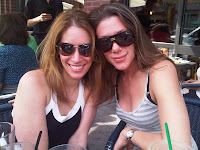 Andrea and I used to live together in Manhattan. It’s been about a decade since then, and we’re still as close as ever.

She came to visit last weekend, and I’ve discovered that seeing her brings back amazing memories of a really exciting, invigorating time in my life. I had just moved to NYC simply because it’s where I wanted to be. I was lucky enough to find a cool gig which turned into one of the best – if not THE best – job I ever had. I was working in Soho and living in the East Village with my best friend.

Not bad. Not bad at all.

A lot has changed since then, but what’s emerging again is an overwhelming craving for adventure and an appreciation for the people in my life – like Andrea – who make me feel like anything is possible. 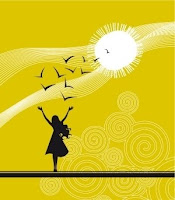 The weather’s been so great the past few days that it’s impossible not to be in a good mood.

I did a radio debate on Tuesday for The Dave Glover show on 97.1FM Talk in St. Louis – a right wing station.

The “Republican” Missouri state representative I was pitted against – Cynthia Davis – was an accidental single-payer advocate. She was such a dolt that she didn’t even know it. She argued against the health care reform bill on the grounds that the government would be taking away her rights, but at the same time, she hates the insurance companies. She claimed she lived 12 years with no health insurance before she was a state rep. Brilliant, right?

Anyway, the highlight was when she said if she wanted to Superglue her daughter’s head as opposed to getting her stitches, she should be allowed, and the health care bill was taking away her right to do that. I wish I were kidding. She also said Missouri has “freedom-loving patriots” who like to shop for medical care and compare prices in an emergency.

The segment begins at 17:33, but the madness kicks in at about 29:30. At 31:35, she says I have a Sugar Daddy who picks up the tab for me. (After the break, I mention I’d love to meet said Sugar Daddy because if he exists, he’s doing a lousy job of actually paying for anything.)

The callers are just as special, including the man who rants about Medicaid and the woman who makes more than $250,000/year and thinks people who aren’t as wealthy as she is aren’t trying.

You really have to hear it to believe it. (UPDATE: It’s the March 30th shows 2 and 3. Seems the url will link to the player but not the exact clip you want. You have to choose the show from the list. Pick 2 and then just let it run into 3.)

If that’s not enough to tempt you to listen, try this. Here’s Cynthia’s closing argument:

“Once it’s out of our control, they are going to kill the unborn babies”

Don’t say I didn’t warn you.

Today’s quote of the day comes from the Health Care for America Now meeting that just wrapped about 10 minutes ago. Rumor has it our Research Director – though he wasn’t present – is to blame: