I let someone stay at my place while I was abroad, and he trashed it. I also suspect he did something to my TV since it popped, smoked, and died the moment I turned it on. The apartment’s now clean, but I’m still without a TV.

I went to my local Best Buy to purchase a new set, and when I got it home and opened the box, there was a scratch across the front of the screen. When I went back to Best Buy to return the set, I found 4 men sleeping in the store while the oblivious sales staff was “working” just steps away. Here is a shot of Best Buy Tenleytown: 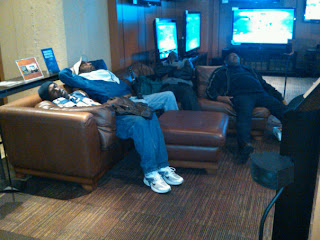 Because they were so on top of it, the sales staff thought they had a replacement set in stock but didn’t. I took a refund and decided to go the online route instead. That’s when I found the set I like for about $20 less – with delivery – on Sears.com.

That was last Monday. On Tuesday, I received an email from Sears.com saying “Your Order Has Shipped.” Here is a shot from that email:

My credit card was charged, and I was told to expect delivery by today – the 24th.

I watched the UPS tracking status not budge for a week, and this morning, I called Sears.com to find out what happened to my TV. The Sears.com representative told me UPS has the package, but because Sears uses “zone shipping” (whatever that means), my package status would not change on the website until the TV hit a local office. She said I had to call UPS. UPS’s first agent – Sam- refused to give me any more information beyond what I could read for myself online, and when I asked to speak to a manager, he put me on hold and then disconnected the call. I spoke to a second UPS agent who said they did not have the package, and I would have to call Sears.

I called Sears for the second time and was told that UPS was lying, that they do this all the time, that the package was sitting on their dock somewhere, and it was definitely UPS’s fault. But Sears was going to get a delivery manager to track my package and get back to me.

I just received the following email from Sears: (click on the image to see larger)

I called Sears, cancelled my order, and filed a complaint, but the customer service representative whose name I won’t mention because he was the only honest person I spoke with all day admitted this is an ongoing problem and my complaint would most likely sit unread indefinitely. I followed up with a note to Sears explaining my frustration and my intention to spread the word that Sears.com is unreliable, inefficient, and dishonest. I said I would be recommending potential customers just stay away.

So consider this my official warning. Sears.com is an atrocious online vendor, and you are better off shopping elsewhere.

One thought on “Crappy Company of the Week: Sears”