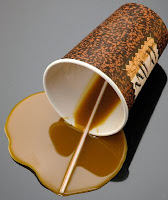 An Open Letter to the Guy Who Spilled His Coffee On Me This Morning:

It’d be one thing if I were running and barreled into you. It’d be another if I wasn’t looking where I was going. But I was walking straight ahead, and you backed into me. So when you spilled your entire cup o’ joe down my right arm and then stared at me as if it were my fault for being in your way, the least you could have done was say you’re sorry. Instead, your girlfriend (wife?) had to remind you that an apology was in order, and even then, you were clearly more annoyed by the loss of your beverage than concerned that maybe you’d scorched a stranger.

You’re lucky that coffee was only lukewarm. And it’s a good thing your friends still appreciate that a little common courtesy was in order.

I know that if the tables were turned, I would have been incredibly apologetic and waited until you came out of the nearby salon which was gracious enough to lend its sink to ask again if you were okay. Instead, you chose to bail and only felt compelled to say something from a distance once you accidentally caught my eye as you turned back from where you’d already sauntered ahead.

Where was I the day decency died? Because I certainly would have had something to say about it.

Yours with disdain,
Jacki