I took a long walk yesterday evening and passed what looked like an RNC/DNC softball game. I caught the red shirts with “Republican National Committee” written across the front but didn’t get a good look at the blues. I can only assume based on the volume of roar from the crowds, the opposing players were Democrats.

And this got me thinking. That spectacle – to me – was the perfect metaphor for everything that’s wrong with politics and government in DC these days. To those running the show – and in large part the press too – it’s all just a big game.

Who’s up. Who’s down. Who’s scored the most points for his team.

But what we’ve forgotten is how high the stakes are and what suffers when contest trumps content. People do. As DC staffers suit up in matching t-shirts and slug away at a big yellow ball, more and more homes fall into foreclosure, Americans are searching desperately for work, and families are still struggling to stretch every last dime. There are real people on the other end of every piece of legislation who need government to work for them, not apart from them. It feels too often like politicians and their colleagues in this town treat the business of running the country like it’s simply a sport.

I think it’s a real shame that those who sit across from each other in Congress and those who work for opposing parties can’t seem to keep the big picture in play.

Last night’s NPR piece about Democratic Congressman Tom Perriello echos my sentiment (h/t Naomi). Perriello believes in what he’s branded “conviction politics,” and now up for reelection, he has to work on selling what many consider “hard votes:”

Back in his truck, between glances at his BlackBerry, Perriello gets fired up thinking about the many thousands of jobs lost in his district.

He’s frustrated by what he calls the “games” played in Washington, especially by Republican leaders, whom he considers morally empty.

“You see these jobs bills that could actually be putting people to work — that are smart, pragmatic solutions,” he says. “And you see them playing games. It’s like, ‘Go spend a day with someone trying to find a job. Go spend, you know, a week trying to live on minimum wage. And then come back and have the nerve to try to kill this jobs bill by doing something that will create a 30-second spot in the election.’ “

“The demagoguing about death panels and other just outright lies are not worthy of the American people,” he says. “They poison and corrupt a sacred space of public trust.”

Perriello doesn’t mince words about the failures of Democrats, either, who he says take a good, bold idea, and then cut it in half to appeal to the center.

“I think one problem that a lot of liberals have is that they feel like once they pass good policy and they get The New York Times editorial board to say it was good policy, that should be the end of the conversation,” he says. “No, your job is to go out and communicate with your constituents; go out and make the case. And yes, it sucks that the other side has $100 million dollars’ worth of free propaganda every week that we have to go up against. But roll up your sleeves, get to work, make the case — because the facts are on our side.”

I don’t know who won last night’s softball game, and I couldn’t care less, but I’d bet there’s a whole lot of bragging going down today. I’d also wager it doesn’t sound any different than when the RNC and DNC ignore the nuts and bolts of good policy and simply strive to one-up each other in public opinion or the press.

Nothing I say will change the course of anything, I know, but if it were my call, I’d say our political system is a slump. Each party’s too consumed with winning and losing in DC and not paying enough attention to what impact all that superficial jockeying is having out in the field. Sadly, for the American public, the game’s been a no-win for years. 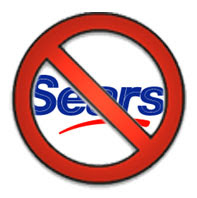 This is the end of the story. Sears refused to budge on the 25% discount and “$50 gift certificate.” TV’s going back.

That company has no business being in online sales. They are a dishonest, incompetent corporation, and their Customer (dis)Service department is a joke (In what world does 10 minutes equal 6 hours? One to two days equals three?). I’m telling you, any savings in price is not worth the cost in time and energy you’re guaranteed to spend tracking down your order and then haggling for fair compensation to make up for all that wasted time and energy.

Offering someone $50 off the next purchase when they’ve been given the runaround for three weeks on this purchase is absurd. It’s not about the money. I can spare the cash. It’s their gross incompetence and inability to recognize how obnoxious they’ve been that makes me furious, and I’d rather give $1000 to another company than hand them a dime.

Spreading the word far and wide. Stay far away from Sears.

How long does it take to get approval for $25?

The latest in the Sears saga goes something like this. The TV was delivered last week while I was out of town. It was delivered the day after I got the email from Sears saying the order for the TV hadn’t even been processed yet and about 24 hours after I asked Sears to cancel my order.

After some extensive back and forth with a representative from their SearsCares department, they offered me 20% off the TV, a $25 gift certificate, and the weekend to think it over. (UPDATE: I forgot to mention they upped this to 25% off and a $50 gift certificate after I said no to the first offer). Tuesday, I got another call and explained I would accept 50% off, and they could scrap the gift certificate. The representative said he needed 10/15 minutes to see if that was something they could do.

About 20 minutes later, I got a call back from the rep saying he needed 24 to 48 hours more. That was Tuesday at 2pm. You do the math.

Speaking of math, the difference between what they offered and what I asked for – monetarily – is $25. So it would seem it takes at least 56 hours – and counting – for Sears to decide whether or not it wants to hand an incredibly disgruntled customer an additional $25.

Brilliant PR move, people. Really bright. In fact, I’m thinking their new slogan should be “Come See the Stupid Side of Sears.” 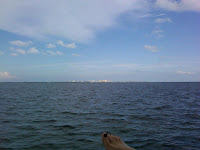 Apologies for the radio silence around here once again, but I went down to Miami to see the ‘rents, take in a little sun (safely with spf), and retrieve the cat.

I’m now back home waiting for Sears to make a decision as to how it plans to deal with the great TV debacle. No joke. I shall update you on the course of events and how they have unfolded – in excruciating detail should you so desire – when the company finally decides what it wants to do.