My friend Steve works for NASA, and today, he invited me to a presentation by the astronauts from the STS-132 Atlantis crew and ISS astronaut TJ Creamer who spent almost 6 months in space. 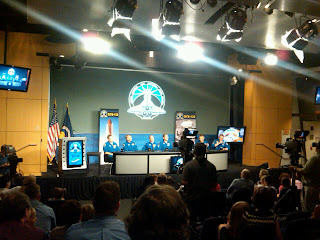 The guys were relatively entertaining, and the pictures they took of themselves in space were cool to see. But the overall event dragged a bit, and the Q and A was definitely too short. I didn’t get to ask my awesome question which would have gone something like this:

“I understand the Russians often bring vodka with them to the ISS. Have there been any studies done on the physiological effects of alcohol on the body in space?”

That’s the edited version. Steve thought, “What’s it like to get drunk in space?” was a little too raw.

Steve and I also had a lot of fun making fun of some really random comments that came out throughout the hour. One in particular lent itself to endless ridicule. Apparently, the International Space Station is an award winning space station. Award winning? What’s it competing against? In what competition?

The mind wanders. Have at it. We did.