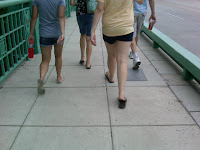 As a daily runner and believer that walking is highly underrated, I spend a lot of time navigating city sidewalks. Lately, I’ve noticed some common obstacles worth identifying and sharing so you’ll be prepared in case you care to follow in my footsteps one day.

This is the most basic sidewalk obstruction, but at times, it can be the most challenging for the uninitiated. It usually consists of four people walking four across – a family, a group of friends, etc. – with complete disregard for the fact that other people may need to pass by at some point. Approaching a wall head on, you can occasionally get through with a simple, “Excuse me” coupled with a small visual sign of frustration. More often than not, the wall fails to separate voluntarily, and you need to get a little more demonstrative with your displeasure. A well-crafted comment while passing can be sufficiently gratifying. In contrast, if you are approaching a wall from behind, all bets are off. A loud “Excuse me” typically scares the wall. When someone jumps with surprise – and someone always will – you can make your way through that hole in the wall. But go quickly because the wall is guaranteed to reform almost instantaneously.

This variation on the wall only consists of two people instead of four but can be equally difficult to maneuver past due to its unpredictability. Imagine two people engrossed in conversation weaving from side to side, leaving no room for passing by on either. You can usually get a wandering wall to steady if it sees you coming, but like the basic wall, it’s tougher to negotiate from behind. Again, a loud “Excuse me” and a quick scoot through the subsequent hole caused by the shock that someone else actually wants to use the same sidewalk is your best bet.

Named for its height, this obstruction consists of a dog walker and his or her charge, connected by a leash strewn across the sidewalk like the lowered limbo pole at a bad all-inclusive resort. Since it’s impossible to blame and/or move the dog, your only way to get around the rope is to once again use your most forceful “Excuse me” and maneuver around the outside of the human the moment (you guessed it) surprise ensues.

Identified by its obstructive position between driveway and road, the Car Park sets up a impenetrable wall overcome by only one of two ways. The walker/runner can maneuver in front of the vehicle, stepping out into the roadway and hoping the driver doesn’t decide to hit the gas at the exact same moment. Obviously, that move is dangerous and not recommended. The second option is to pass behind the car, away from the street. However, there is always a small risk that the driver will change his or her mind and back up again. The safest choice is to get the driver’s attention and use hand signals to indicate where you’re choosing to go. I don’t recommend that hand signal being a middle finger no matter how strong the temptation.

Found almost exclusively in city commercial districts, the Blind Back-up is fairly easy to spot but challenging to avoid. It occurs when two people are engaged in a conversation, and as one is departing the location of the conversation, he or she backs-up blindly into oncoming foot traffic. The “blind” chatter tunes out his or surroundings and pretends the reverse maneuver is happening in a vacuum of space. As you approach a Blind Back-up, you have to do a quick mathematical assessment of your speed in relation to the speed of the reversee. Calculated accurately, you may be able to beat the back-up. If not, an outstretched hand to fend off the inevitable collision can usually startle the talker into an abrupt stop.

The Parent Trap is named for the people responsible for rowdy kids running amok – their parents. A mini-wall of tots is most infuriating when you’re approaching in full view of the grown-ups, and they fail to corral the herd. An agile, practiced pedestrian can weave through the Parent Trap unscathed, but one sudden unexpected, “Hey Mom, look at me!” and you’re on the fast track to collision city. The best you can do is anticipate and be prepared to improvise.