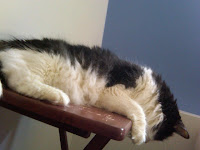 Apologies for the slow posting around here lately. I’ve been distracted.

In addition to trying to finish “The Girl Who Kicked the Hornet’s Nest” (my least favorite of the Larsson trilogy, by far), I just got a couple of new books. One is Landmark – The Washington Post’s take on the health care battle and bill. The second is a workbook on Spanish verb conjugations. I started to think a simple review of the basics would help get my Spanish back up to speed. So far so good.

I’ve also taken the liberty of repainting a couple of walls in my apartment. It started with one accent wall, but this morning, I used the leftover paint on a second. Today’s project went a lot more smoothly than yesterday’s. I chalk it up to having had practice.

Here’s the FB update I posted after finishing the first:

The wall looks blue in the photo, but it’s actually a dark lavender.

As for stuff you could be reading online while I slack, I’d recommend Chez on Jon Stewart’s Oct 30th Rally to Restore Sanity. I know it’s tough for people to get away, but wouldn’t it be amazing if reasonable and rational saved the day?

One thought on “You Missed a Spot”