I celebrated my birthday by spending five great days with Levana in Vermont and Montreal. We’re both big walkers so there was a lot of that. There was also a lot of eating.

The food in Burlington was incredible. All fresh. All local. In Canada, we continued the trend with everything from chocolate to traditional French cuisine to the infamous poutine.

1. It rained all day Friday so we up to Waterbury and took the Ben & Jerry’s factory tour. The best parts were the free sample and the soggy trek to the Flavor Graveyard. 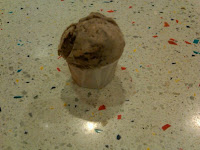 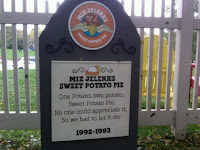 2. En route to Montreal. Basket in the back seat filled with honey crisp apples, blue cheese, and a loaf of caraway, salt, wheat and rye bread picked up at the Farmers’ Market before departure. 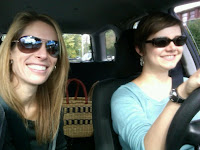 3. A little dessert before dinner. A stop at Juliette & Chocolate where we ordered two hot chocolates – one hazelnut and one caramel – and a brownie a la mode with milk hot chocolate to pour over top. That brownie was sin on a plate. 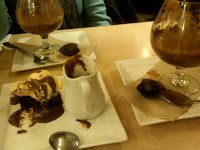 4. I don’t have photos of the official birthday dinner at L’Express, but it was spot-on. On Sunday, we went for poutine. Levana had the classique (just cheese curds and gravy). I went for the mexicana which also had hot peppers, tomatoes, and black olives. I thought it was going to be kind of gross since I don’t tend to eat food that heavy, but I was wrong. 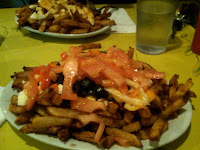 I’ll spare you the rest of the sightseeing pics, but I do want to share a cool video. This is the drum circle held on summer Sundays in the Parc du Mont-Royal: