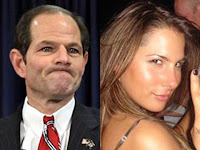 I think Glenn Beck is dangerous and have no interest in encouraging anyone to listen to him ever.

However, via TVNewser, Beck spews a rare nugget of truth in calling out CNN for giving Eliot Spitzer a show:

“Then they go to Eliot Spitzer. There’s a change, if you just have a guy who frequented hookers on by himself. But you can’t do that. That’s too risky. ‘Let’s not have the hooker guy on by himself, let’s have some chick on with him. Now America will watch!’”

I flipped on Parker/Spitzer for about 10 minutes one evening about a week ago out of morbid curiosity, and it was exactly as expected – uncomfortable, unprofessional, and entirely inappropriate. I’ve seen cable access shows with better flow. Neither of these people is fit to be hosting a television program on a national news network. In the short amount of time I managed to tolerate the spectacle, I heard Parker ask a French philosopher why he believes some Americans are disillusioned with President Obama. Here’s a thought. Go to the source. I don’t need someone’s opinion as to why something is if it’s provable. Do the legwork. Talk to the people who are actually disillusioned.

The second cringe-worthy moment was when Spitzer told his panelists (which included “America’s Next Top Model” personality and former supermodel Paulina Porizkova) that the conversation was getting too heavy, and they should lighten it up. Apparently, Spitzer (and/or the producer in his ear) believes substance is problematic.

Over the past couple of weeks, I’ve seen a promo for this abomination of a show in which Parker comments that because she’s a journalist and Spitzer is a politician, they don’t always trust one another. Really, Kathleen? That’s why you can’t trust Eliot Spitzer?

Client 9 – the new documentary about Spitzer from Alex Gibney – the guy who made Enron: The Smartest Guys in the Room – is set for theatrical release on November 5th. I haven’t heard or read enough about it yet to know whether it’s legit (at least one Republican strategist cries foul), but I do hope it reopens the conversation about Spitzer’s crappy, illegal behavior. It can’t hurt to remind CNN – a network that once bragged it was “The Most Trusted Name In News” – why a man who frequented prostitutes, humiliated his wife, and was forced to resign his governorship never should have gotten his own television show in the first place.

Now that Jon Klein is gone, CNN execs would be wise to get this disaster off the air asap.