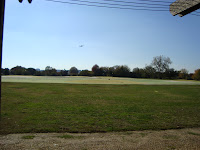 Don’t ask me how I got this far in life without ever having hit a real golf ball (mini golf aside), but somehow it happened. So when my friend Sean invited me to check out a driving range and learn how to play, I jumped at the chance.

We went out to Hains Point yesterday and had a blast. Sean’s dad was a golf instructor so he knew how to teach and stay patient while I picked up the basics. I was really proud of my prowess on the range as it didn’t take long to connect and get some impressive air and distance on the ball. There were only a couple of near misses, and by the end of the lesson, I felt like I had enough info to head back on my own sometime and practice.

After driving for a bit, we went out to the putting green. I was a tad less successful in that arena. My biggest challenge was gauging how hard to hit the ball to make it to the hole without overshooting. Sean wanted me to make each putt in two. My average was closer to four. But at one point, he said if I could make the shot in two, he would buy me lunch, and at that moment, I did it. Sean’s response became the quote of the day:

“You putt like a mutant until there’s food on the line.”

I’m nothing if not determined. A girl’s got to eat.

We took some video of the adventure, and I used my newly acquired iMovie skills to create a recap of the day. Enjoy.

One thought on “So You Think You Can Golf?”