Not a bad place to be from this time of year: 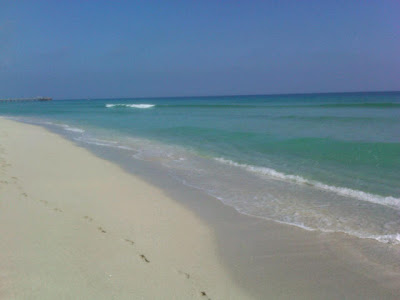 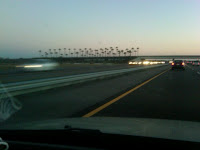 Actually, we drove. 16 hours from DC to South Florida. If it wasn’t a record, it certainly felt like it. Apparently listening to a book on tape is the key.

Anyway, I will be posting a little less frequently for the next couple of weeks. Not that I have been terribly prolific recently, but I thought it only fair to give warning.

Of course I’ll check in if there’s something worth mentioning, but mostly I’ll be taking advantage of being active outdoors in December.

I owe you an explanation.

With the exception of my month in Spain and a handful of small vacations along the way, I think this is probably the longest I’ve gone without consistent posts in the past three years. It’s not that I don’t have something to say. It’s more like I’m tired of saying the same thing over and over again.

TV news continues to infuriate me. I’m not happy with the Administration. Congress is a joke. We need a wholesale housecleaning in Washington, and while we’re at it, we should talk term limits and extensive campaign finance reform. DC is so bought and paid for that I wouldn’t be surprised if a corporate logo popped up on a monument this afternoon.

Two nights ago, Jon Stewart dismantled Senate Republicans for their cruel hypocrisy in pushing tax breaks for the wealthiest 1% while refusing to fund health care for 9/11 first responders. It’s a great segment. It’s also the kind of reporting that should be done by traditional news outlets. Take a look:

As for the President, my former boss wrote the following on Huffington a few days ago in a post entitled What Obama Can Learn From Reagan:

What the president fails to comprehend is that his style of public vacillation and preemptive compromise is much more to blame for the disillusionment that so many Democrats share than the substance of what he gave up, whether it be on health care or taxes.

On the issue of health care reform:

But the primary reason that his base lost sight of this extraordinary achievement is that Obama and his top advisors kept publicly waffling on the issue that had come to symbolize reform that would really change the status quo: the public option. His strongest supporters squirmed as he made the case for the public option in one breath, while in the next said that he would be willing to accept compromises that would render it ineffective. While the pattern of negotiating in public was most noticeable on this issue, it was far from the only instance in the debate of Obama watering down his proposals in public without getting anything from opponents in return.

Because I know why the public option was so important and am concerned about some particulars of health care reform in its absence, I’m probably equally disappointed in the substance. But Richard’s right. It’s Obama’s lack of fight – and the appearance of a complete lack of conviction – that’s pissing people off.

But I also would argue that it’s not just Democrats who are turning away from Obama. I posted the following on FB a couple of days ago:

Press loves to talk about the “liberal base” being upset with the President, but I’m guessing most moderates and independents didn’t vote for Obama because they hoped he would compromise in public and either water down or completely abandon his campaign platform. I don’t think the disappointment is “he’s not left enough” so much as “he’s not fighting hard enough for what’s right.”

I think the left makes an excellent straw man, and I think the Administration has completely fabricated an antagonist to vilify. It’s much easier to attack the left than to admit you’ve lost the confidence of moderates and Independents. It’s a poorly veiled tactic that reeks of desperation. Can you imagine President Bush or his spokesman standing at a podium telling right wing voters to suck it up, grow up, or quit whining? Can you fathom a moment when a Republican politician would demean his core constituents en masse? I can’t.

Let’s take a look at what went down with the tax cut “compromise.” John writes:

Why did Obama lay guilt at the feet of his own party as opposed to launching a hardcore assault against Republican lawmakers playing chicken? For lack of a better term, an honest PR campaign holding Republicans’ feet to the fire, forcing them to face the people losing unemployment benefits, and insisting they publicly explain their unwavering commitment to protecting the filthy rich was at least worth a shot. Instead, the Administration cut a deal and gave its own party the public ultimatum.

My friend Levana was interviewed for a local news piece over the weekend and gave the reporter a great quote:

President Obama can’t keep compromising our values, or it will be more and more difficult to inspire the base to go out and work for him. And, the White House needs to realize that every election is a base election.

I’d add that alienating your base to appease people who’ll never work with you and never vote for you is absurd.

The best thing that could happen to Obama would be if Sarah Palin were chosen as the Republican presidential nominee in 2012 because in the absence of a truly horrifying alternative, I doubt Democrats and Independents who invested time, energy, and hope in Obama – believing he would deliver what he so valiantly promised – will be inspired to turn out and vote for four more years of this.

Why is the left the enemy? Why do Obama and the Administration keep telling Democrats to simmer down instead of waging an all out war against Republicans who refuse to budge on tax cuts for the wealthiest one percent? A good PR/communications strategy would have gone a long way here. Instead we get “Trust me. I know what I’m doing.” after the fact. Unacceptable.

John King just said on CNN that Obama’s tax cut capitulation is like his caving on the public option all over again. Gergen said the same thing: “He got the bill but lost the argument.”

Back in February 2009, I posted about “We Live In Public,” a documentary chronicling the life and mad genius of Josh Harris – the founder of Pseudo. I found the film on Hulu last week and just finished watching it this afternoon.

I highly recommend it.

The doc holds a special place in my heart for a variety of reasons, not the least of which is a chance to see Cal the way I remember him – sharp, smart, and smiling. In fact, I was happy to see Ondi include an “In Loving Memory Of” for Cal in the credits.

I do show up in the film for a quarter of a millisecond, but it goes by so fast that while watching, I said to my friend, “Hey, that’s me!” and then had to go back and slow it down to make sure I was right.

I consider myself extremely lucky to have been a part of Pseudo. I still can say it was one of the best jobs – if not the best job – I ever had. I was living in the East Village, working in Soho, making peanuts, and truly excited to get up and go to work every day.

If you’ve got any interest in social interaction online, the evolution of Internet video, or even the psychology behind reality TV, watch this doc. It starts off a touch slow (and Hulu’s ad placement is atrocious), but once the narrative gets going, I think you’ll find it fascinating and worth the time. 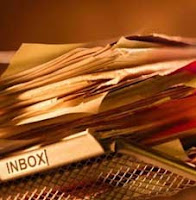 Yeah, I know. I’ve been neglectful of my humble little corner of the Interwebs. It’s not like there hasn’t been plenty to write about – the TSA, the Wikileaks docs, the frighteningly sad state of U.S. hospital care – but, truth be told, I’ve been too preoccupied to put together anything remotely interesting.

But now that my friend is out of the hospital (one day shy of a full two weeks), I can get back to the business of having and sharing an opinion.

It’ll take a little time to wrap my brain around how to tell the story of what we’ve just experienced, but when another friend emailed yesterday and asked how it was going at Sh*tshow General, I knew at least I’d found my title.