The sheer number of people googling “DLC bullseye map” and landing on my site leads me to believe this whole Palin v. DLC map thing may become an issue. Here are the two maps we’re talking about: 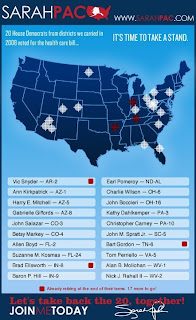 As I mentioned in the previous post, it would be a tremendous mistake for the media to take the bait and draw some false equivalence conclusion, suggesting the current state of overheated political discourse is the result of equally inflammatory rhetoric on both the left and the right. Here’s what I said yesterday:

The DLC doesn’t command a large following and doesn’t tour the country whipping crowds into a frenzy spewing words of anger and hate. 2004 is not 2011, and the political tone now is infinitely more heated than it was six years ago. An archery target is not a gun sight, and the head of the DLC doesn’t brag about gun ownership or star in a reality show wielding a gun. And finally, putting an archery target on a state is a lot different than putting a gun sight on a person, and Palin’s map – unlike the DLC’s – encourages followers to take aim at individual people.

One additional note: The DLC map was printed in Blueprint Magazine – a publication so popular that it’s been gone since 2007. Plus, the DLC considers itself center left. To say it has any sort of real loyal grassroots following is comical. I guarantee you that when that map came out – in print – back in 2004, no one saw it.

Once again, I am not blaming Sarah Palin, Glenn Beck, Sharron Angle, or anyone else in particular for Jared Lee Laughner’s shooting spree. What I am saying, however, is that Sarah Palin, Glenn Beck, Sharron Angle, and the rest of the angry right that is regularly and deliberating distorting the truth to intentionally get people riled up and then – in the same breath – either outwardly or implicitly advocating violent revolution as a solution to political discontent need to take a long, hard look at their role in spewing words that can easily be interpreted as a call to action. There is a reason why Rep. Giffords spoke of Palin’s map in particular after her office was vandalized back in March. It’s not a stretch to conclude that if you say enough of just the right inflammatory stuff over and over again, someone’s going to snap.

Let’s have a conversation about taking it down a notch. That’s what Jon Stewart was trying to do with his Rally to Restore Sanity back in October. I’m sorry that message fell on deaf ears. I’m sorry it took the attempted assassination of a member of Congress and the murder of six other people to get us talking about the possible danger of firebrand rhetoric.

The point is that even if yesterday in Tucson wasn’t at all connected to the current climate of heated political discourse, it easily could have been. And that’s more than enough to want to make it stop.