The Miami Herald ran an opinion column this morning entitled “And the GOP front-runner is…” in which Doyle McManus of The LA Times writes:

The race for the 2012 Republican presidential nomination started in earnest last week at the annual Conservative Political Action Conference in Washington.

So let’s get started. Here’s the conventional wisdom, fresh from the corridors of power, on the state of the Republican race:

There are really only two spots on the GOP ballot. One is reserved for Mitt Romney, the former Massachusetts governor who won nine primaries in 2008. The other is for someone who isn’t Mitt Romney — someone like Sarah Palin, Mike Huckabee or Tim Pawlenty.

Here’s the problem. If the nomination started in earnest at CPAC and we’re talking about the front-runner, shouldn’t we actually mention the front-runner? Take a look at the results of both CPAC straw polls: 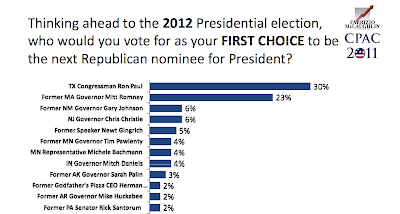 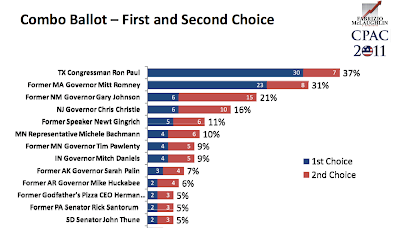 Guess how many times McManus mentions Paul in his piece. If you said 0, you win. He doesn’t. Not once. I am totally unclear on how you write an entire column about the “race for the 2012 Republican presidential nomination” saying it “started in earnest last week” at CPAC and make no mention of Ron Paul. This is the comment I left on the Herald site:

Ron Paul won both CPAC straw polls – the First Choice ballot and the Combo choice ballot – and yet this piece makes no mention of him anywhere. If you title something “And the GOP front-runner is…” and you cite CPAC as the start of the nomination in earnest, how can you pretend the winner of the polls just doesn’t exist? If you have an opinion of who might top the Republican ticket and you want to write that piece, great. But you can’t use CPAC as your lead-in or proof if you’re going to completely dismiss the guy who actually won.

I don’t believe Ron Paul is going to be the Republican presidential nominee in 2012 – and clearly neither does McManus – but at the very least, he should explain why he’s written off Ron Paul.

If he can’t, then he’s got no business writing about CPAC and GOP front-runners at all.

One thought on “Misleader of the PAC”