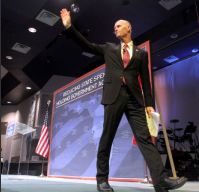 You’ll have to forgive me once again for being a rotten blogtender the past few days. I’ve got some stuff cooking offline that’s left me less time to post.

However, I’d be remiss if I didn’t share one of today’s Herald headlines:

This is my favorite part:

Thad Altman, R-Rockledge, and Arthenia Joyner, D-Tampa, contend Scott violated the Constitution when he rejected $2.4 billion for a Tampa-Orlando line after the Legislature had already voted to move ahead with the project.

“This is not a monarchy. He is not a king,” said Joyner. “This is a democracy. There are three co-equal, independent branches of government and it is necessary for them to be respected.”

I’m tempted to concede that a high-speed rail between Tampa and Orlando may not be the best use of federal funds right now, but if money allocated to that project cannot be used elsewhere and will simply go to some other state if rejected, Scott’s got no business tossing aside $2.4 billion.